After last week’s short teaser, WB Games Montreal has reveal the full trailer for the video game “Batman: Arkham Origins". The game will be released on October, 25 this year and it’s a prequel to the “Batman: Arkham” according to CBR TV.

Read "Batman: Arkham Origins" game to be released this October

The trailer is not gameplay featured but it shows appearances of some of the greatest DC Comics characters such as Green Arrow, Deathstroke the Terminator, Deadshot and Black Mask.

Warner Bros. spokesman confirmed that Roger Craig Smith is the voice of Batman even if last weekend Kevin Conroy said at Dallas Comic Con that he is working on the game “I still can’t say anything about it [...] but it’s amazing. It’s a huge, huge cast, and a big story, and it took almost a year to write and put together. They’ve been working on it for a long time.”

Conroy has been the voice of Batman since…forever. He worked on “Justice League: Doom”,” Batman Arkham City”, “Batman: The Brave and the Bold”, “Superman/Batman: Public Enemies”, “Gotham Knight” and almost every Batman game. Troy Baker is said to voice Joker.

Warner Bros admitted that Conroy will have his part but not as Batman. Anyway, WB Games Montreal have replaced "Arkham Asylum" and "Arkham City" developers Rocksteady Games, and Paul Dini, writer of both previous games, will not return for "Origins."

We know the visuals are going to be amazing, the story even greatest and intriguing than before and now we found out that customers who pre-order the game will have the ability to play as Deathstroke.

BATMAN ARKHAM ORIGINS Game To Be Released This October

There have been some rumors about the “Batman: Arkham” game in 2011 and now we know they are true. The game series will get another installment on October 25. Taking place before the rise of Gotham City’s most dangerous criminals, the game showcases a young Batman as a crime fighter setting his path to becoming the Dark Knight. 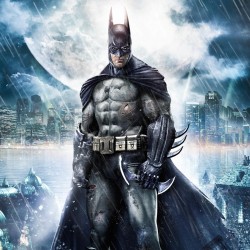 DC Entertainment is going back into Bruce Wayne's past to see how he began his transformation from wealthy socialite to the scourge of Gotham's criminal underworld. Key elements of the character's history are staying the same,  the murder of Wayne's parents, for example .

"It's not `let's redo the origin.' It's time for a new story showing how Batman became who he is in the New 52." Scott Snyder.