While we’re excited about the upcoming “Iron Man 3” movie, Robert Downey Jr. kills the joy with bad news. His contract will end with his last sequel and that leaves us wondering what will happen to Tony Stark.

He was injured on the set and had to shut down the production for several week. Is that the reason why he’s retiring? And what happens with "Avengers 2"?

"This period of time, this shall pass," Downey Jr. said. "Fortunately I've been around the block enough -- I'm not ill-prepared. And I love change. I love it when a lightning bolt hits the genny and you're down for two hours on the set. Now, this isn't a lightning strike, this is like the warning of a gathering storm. "It got me thinking about how big the message from your cosmic sponsor needs to be before you pick it up," he says. "How many genre movies can I do? How many follow-ups to a successful follow-up are actually fun? Because, as quiet as it's kept, I come from a family of very innovative writers and directors and actors and artists... So there's this kind of legacy of souls from what I consider to be a very particular time in entertainment, and I'm sensing a return to that -- it's what me and the missus are doing next. It's not unlike: I heard Brady signed on for three more years with New England, and then he's done being a QB, because he'll be 40. I'm 47, and I'll be 50."

It’s very possible to see  him in Avengers 2 but that seems to be the last superhero movie.

The good news is that we will have Tony Stark. However, without Downey it has no charm. Walt Disney Pictures and Marvel Studios have no intentions of retiring the character of Tony Stark, nor do they plan on "rebooting" the franchise once Robert Downey Jr.steps away from the armor.

"I think Bond is a good example. Let's put it this way: I hope Downey makes a lot of movies for us as Stark. If and when he doesn't, and I'm still here making these movies, we don't take him to Afghanistan and have him wounded again. I think we James Bond it. I think the term reboot has got to go. I think it's like after the Star Wars movies nobody likes the idea of prequels, and reboots have turned into the same thing." Says Marvel’s president, Kevin Feige.

We have to dig deeper and to think in advance so we came up with 5 actors that could possibly be Tony Stark. Even so, we have to mention that no one will be as good as Downey. Just to be clear.

First of all, who is arrogant and cocky? Jon Hamm, the “Mad Men” star might do well as a superhero character. We add some pencil thin mustache and a glass of Scotch and all is done.

He’s not an actor but he surely can be one. Robbie Williams looks a bit like Downey and has the charm and attitude also. Maybe he is a bit rusty but he can gear up and play an amazing Stark with Gwyneth Paltrow.

Colin Farrell is no stranger to substance abuse (just like Downey) and has been struggling to make it in Hollywood for years now. He needs a big movie like Iron Man at this point in his career, and he's just the right age.

Johnny Depp is known for playing all kinds of roles and he manages make them his personas. We have no doubt that he will be the only one to get so close to Downey’s Iron Man and his arrogance is even bigger that Robert’s but this time it’s well founded and earned.

Hugh Laurie "House M.D." is the best copy of Downey and we will love to see him out of the hospital playing with ironic lines in a metal suit. Downey and he look like two brothers from another mothers.

If you have any suggestions about other actors who can play Tony Stark, let us know.

Kevin Fiege and other executive producers gave a hint about what Marvel plans next. While “Iron Man 3” is having a blast at the box offices, Robert Downey Jr. is in negotiations to return in “Avengers 2” and Marvel works on new superhero movies. 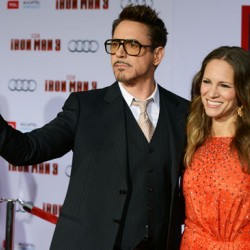 After hearing and reading everyday news about “Iron Man 3”, Tony Stark or Robert Downey Jr., the superhero pic is finally out overseas. The movie broke down the box office’s gates as it was expected. Marvel opened with a whopping $36.5 million in just two days of weekday release. 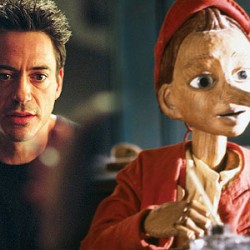 A new adaptation of the famous tale about a wooden puppet who wants to become a human boy is going to be screened by Warner Bros. Robert Downey Jr. has been attached to Warner Bros.’ “Pinocchio” since last year and now he asks Ben Stiller to join him.

We see Robert Downey Jr. playing his Iron Man role so easily, making everything look like a joke but, to have that attitude he must endure some pain and have a lot of patience. There are 4 hours left until the exclusive trailer premiere of “Iron Man 3” and, before you see it, you might want to know what’s behind it.